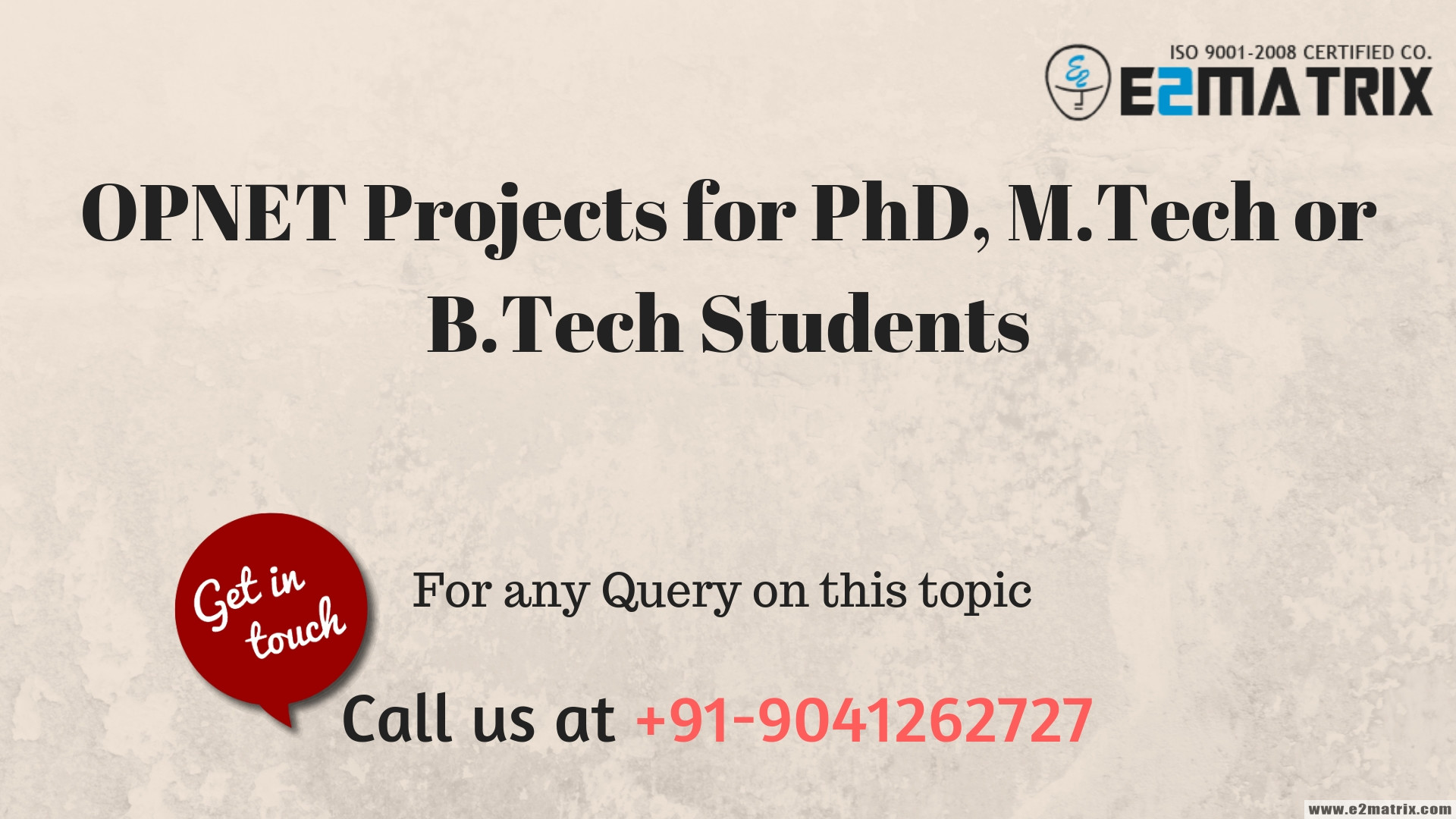 OPNET means Optimized Network Engineering Tools (OPNET) is a comprehensive engineering system capable of simulation large communications networks with detailed protocol modeling and performance analysis. The Behavior and performance both can be analyzed by discrete event simulation. OPNET Projects for PhD has been designed to provide a comprehensive work environment for the network modeler that takes advantage of the sophisticated graphics of engineering workstations.

The tools provided by OPNET Project for B.Tech from a tightly-integrated system with the following principle features for OPNET Projects For M.Tech

OPNET system is a set of tools which can be divided into three functional areas:

The tool is used to specify network models, which consists of subnetwork and node objects. Node objects are physical instantiation of node models built in the Node Editor, while subnetwork as well as the top or global modeling level, nodes may be placed on a dimension plane for those models in which physical location is relevant. Because the Network Editor represents the most encompassing modeling in OPNET Projects for B.Tech, it also provides the operations necessary to bind together all lower level specifications into a single executable simulation.

This tool is used to specify node models, which consist parameterized modules interconnected in an arbitrarily complex graph to represent the information flow and structure aspects of a particular class of communications node. The supported module types include general processors, generators, queues, transmitters and receivers, and antennas.

This tool is to specify process models which represent tools, algorithms, or in general, decision making processes. The specifications are based on proto-c language Finite State Machine representations and include the names of states, transitions between states, the conditions for each transition, the actions which are taken upon entering or exiting a state or making transition, temporary and state variables, and formal attributes of the process.

This tool includes several distinct editing modes which are used to specify model parameter that are more complex than simple numeric or string input. Parameter types include functions of one or two independent variables, which are specified graphically, and data tables, which are specified via a spreadsheet-like interface. The parameters created in the editor are: Probability Density Function (PDF), Packet Formats, Interface Information (ICl) formats, and additionally for OPNET/B, Antenna Patterns, and Modulation function.

This tool is used to specify data collection requests which may be applied to a simulation at run time in order to cause the executing model to place specific data into an output file. A file created in the Probe Editor consists of a list of probes each of which hierarchically references a statistic, a module, a node, and a sub network.

If you are student of B.Tech, M.Tech or PhD and want Guidance and projects on OPENT Simulator, Our Experts provides you complete support in selection of projects, implementation and with documentation. For more just talk to our experts over a Phone Call at +91-9041262727 or email us at support@e2matrix.com