1.It calculates the minimum execution time for all tasks.

2.The task with the least execution time among all the tasks is chosen. The algorithm further proceeds by assigning the task to the resource that produces the minimum completion time. The same procedure is repeated until all tasks are scheduled. 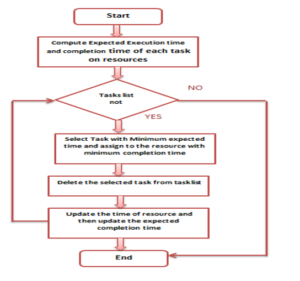 The working of the Max-min algorithm is similar to the Min-min algorithm. The differentiating feature is as per the name as the word “minimum” is replaced by “maximum” similarly, here the task having the maximum earliest completion time is assigned to the corresponding resource. Here, larger tasks are given priority over the smaller tasks.

Max Min is similar to the min- min algorithm except the following: after finding out minimum execution times, the maximum value is selected which is the maximum time among all the tasks on the resources. Then according to that maximum time, the task is scheduled on the corresponding machine. The execution time for all other tasks is updated on that machine and assigned task is removed from the list of the tasks that are to be assigned to the machines. 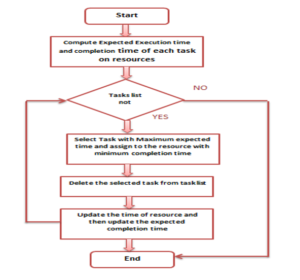 RASA is a hybrid scheduling algorithm composed of two traditional techniques- Max-min and Min-min. The min-min strategy is used to execute small tasks before large tasks and Max- Min strategy is applied to avoid the delays in large tasks execution. 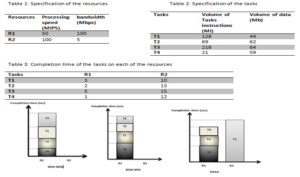 Step 1: Perform initialization of the pheromone
Step 2: while (stopping criteria not reached) do
Step 3: Set locations of all ants in an initial Virtual Machine
Step 4: while (all ants have not reached at a solution) do
Step 5: for each ant do
Step 6: Choose VM for the subsequent task using the intensity of pheromone trail
Step 7: end for
Step 8: end while
Step 9: Update the pheromone
Step 10: end while
Step 11: end

The BCO algorithm is based on the activities of bees while searching for nectar and sharing the information with other bees.

There are three types of agents –

The employed bee stays on a food source and provides its surroundings in memory; the onlooker acquires this data from the employed bees and selects one of the food sources to forage, and the scout performs the task of finding new nectar sources 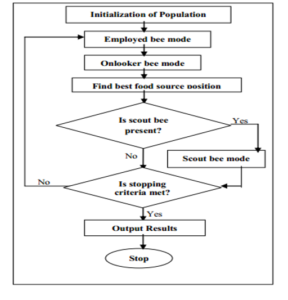