Clustering is the process of making a group of abstract objects into classes of similar objects. Having similarity inside clusters to be high and low clustering similarities between the clusters.

Cluster:-Cluster is basically a collection of similar objects.

The algorithm is composed of the following steps:

Let’s imagine we have 5 objects (say 5 people) and for each of them, we know two features (height and weight). We want to group them into k=2 clusters.

Now we compute the Euclidean distance between each of the two centroids and each point in the data.

At this point, we will assign each object to the cluster it is closer to (that is taking the minimum between the two computed distances for each object).

We can then arrange the points as follows:

Let’s iterate, which means to redefine the centroids by calculating the mean of the members of each of the two clusters.

Then, we calculate the distances again and re-assign the points to the new centroids.

We repeat this process until the centroids don’t move anymore (or the difference between them is under a certain small threshold).

In our case, the result we get is given in the figure below. You can see the two different clusters labeled with two different colors and the position of the centroids, given by the crosses. 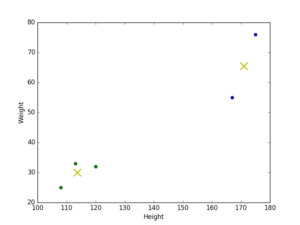 The two different clusters in blue and green. The crosses indicate the position of the respective centroids. 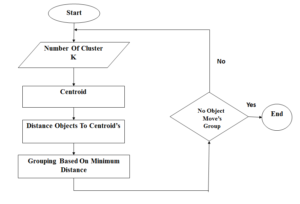