Hadoop is an Apache open source framework written in Java that allows distributed processing of large datasets across clusters of computers using simple programming models. A Hadoop frame-worked application works in an environment that provides distributed storage and computation across clusters of computers. Hadoop is designed to scale up from a single server to thousands of machines, each offering local computation and storage.

We can use the following diagram to depict these four components available in Hadoop framework. 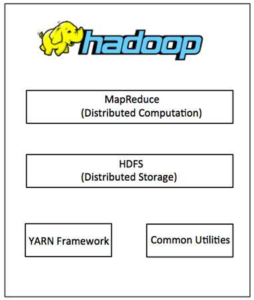 Since 2012, the term “Hadoop” often refers not just to the base modules mentioned above but also to the collection of additional software packages that can be installed on top of or alongside Hadoop, such as Apache Pig, Apache Hive, Apache HBase, Apache Spark etc.

Hadoop MapReduce is a software framework for easily writing applications which process big amounts of data in parallel on large clusters (thousands of nodes) of commodity hardware in a reliable, fault-tolerant manner.

Typically both the input and the output are stored in a file-system. The framework takes care of scheduling tasks, monitoring them and re-executes the failed tasks.

The MapReduce framework consists of a single master JobTracker and one slaveTaskTracker per cluster-node. The master is responsible for resource management, tracking resource consumption/availability and scheduling the jobs component tasks on the slaves, monitoring them and re-executing the failed tasks. The slaves TaskTracker execute the tasks as directed by the master and provide task-status information to the master periodically.

The JobTracker is a single point of failure for the Hadoop MapReduce service which means if JobTracker goes down, all running jobs are halted.

Hadoop can work directly with any mountable distributed file system such as Local FS, HFTP FS, S3 FS, and others, but the most common file system used by Hadoop is the Hadoop Distributed File System (HDFS).

The Hadoop Distributed File System (HDFS) is based on the Google File System (GFS) and provides a distributed file system that is designed to run on large clusters (thousands of computers) of small computer machines in a reliable, fault-tolerant manner.

HDFS uses a master/slave architecture where master consists of a single NameNode that manages the file system metadata and one or more slave DataNodes that store the actual data.

A file in an HDFS namespace is split into several blocks and those blocks are stored in a set of DataNodes. The NameNode determines the mapping of blocks to the DataNodes. The DataNodes takes care of reading and writes operation with the file system. They also take care of block creation, deletion, and replication based on an instruction given by NameNode.

HDFS provides a shell like any other file system and a list of commands are available to interact with the file system. These shell commands will be covered in a separate chapter along with appropriate examples.

A user/application can submit a job to the Hadoop (a Hadoop job client) for a required process by specifying the following items:

The Hadoop job client then submits the job (jar/executable etc) and configuration to the JobTracker which then assumes the responsibility of distributing the software/configuration to the slaves, scheduling tasks and monitoring them, providing status and diagnostic information to the job-client.

The TaskTrackers on different nodes execute the task as per MapReduce implementation and output of the reduce function is stored into the output files on the file system.

WHAT IS WORD COUNT

Word count is a typical problem which works on Hadoop distributed file system and map reduce is an intended count the no. of occurrence of each word in the provided input file. Word count operation takes places in two phases:-

for each word in file-contents;

for each value in values 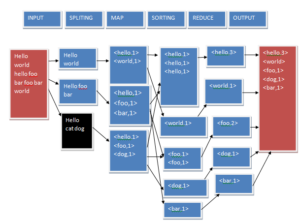 Map reduce is a 3 steps approach to solving a problem:-

The purpose of a map step is to group or divide data into a set based on desired value. While using map function we need to be careful about 3 things.

Reduce operation combine different values for each given key using a user-defined function. Reduce operation will take up each key and pick up all the values created from map step and process them one by one using custom define logic. It will take 2 parameters:-

It is used to do any required transformation on the final output of the reduce.

It is used in many applications because of parallel processing like document clustering, web link graph reversing and inverted index construction. As it is map-reduce so it increases the efficiency of handling big data .it is used where we need data to be available all the times and security is needed.map reduce related works are:- 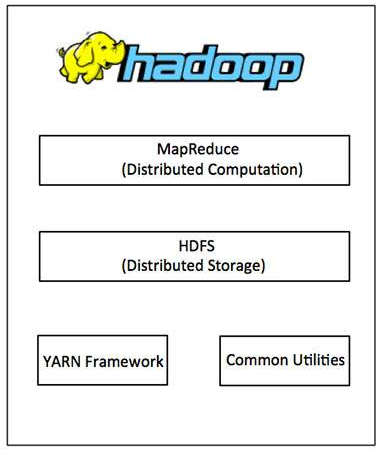