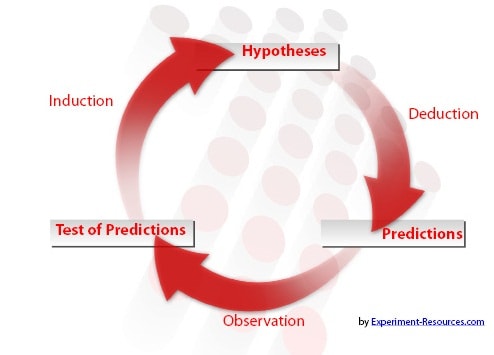 The research process deals with the ways and strategies used by researchers to understand the world around us. This is a guide to basic elements of scientific research.

Key Concepts of the Scientific Method

There are several important aspects to research methodology. This is a summary of the key concepts in scientific research and an attempt to erase some common misconceptions in science.

Steps of the scientific method: are shaped like an hourglass – starting from general questions, narrowing down to focus on one specific aspect, and designing researchwhere we can observe and analyze this aspect. At last, we conclude and generalize to the real world.

Researchers organize their research by formulating and defining a research problem. This helps them focus the research process so that they can draw conclusions reflecting the real world in the best possible way.

In research, a hypothesis is a suggested explanation of a phenomenon. 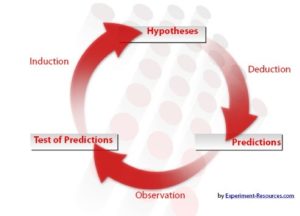 A variable is something that changes. It changes according to different factors. Some variables change easily, like the stock-exchange value, while other variables are almost constant, like the name of someone. Researchers are often seeking to measure variables.

The variable can be a number, a name, or anything where the value can change.

In explorative research methodology, e.g. in some qualitative research, the independent and the dependent variables might not be identified beforehand. They might not be stated because the researcher does not have a clear idea yet on what is really going on.

Operationalization is to take a fuzzy concept (conceptual variables), such as ‘helping behavior’, and try to measure it by specific observations, e.g. how likely are people to help a stranger with problems. 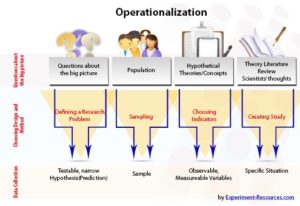 The selection of the research method is crucial for what conclusions you can make about a phenomenon. It affects what you can say about the cause and factors influencing the phenomenon.

It is also important to choose a research method which is within the limits of what the researcher can do. Time, money, feasibility, ethics and availability to measure the phenomenon correctly are examples of issues constraining the research.

Choosing the scientific measurements are also crucial for getting the correct conclusion. Some measurements might not reflect the real world, because they do not measure the phenomenon as it should.

To test a hypothesis, quantitative research uses significance tests to determine which hypothesis is right.

A significance test may even drive the research process in a whole new direction, based on the findings.

The t-test (also called the Student’s T-Test) is one of many statistical significance tests, which compares two supposedly equal sets of data to see if they really are alike or not. The t-test helps the researcher conclude whether a hypothesis is supported or not.

Drawing a conclusion is based on several factors of the research process, not just because the researcher got the expected result. It has to be based on the validity and reliability of the measurement, how good the measurement was to reflect the real world and what more could have affected the results.

The observations are often referred to as ’empirical evidence’ and the logic/thinking leads to the conclusions. Anyone should be able to check the observation and logic, to see if they also reach the same conclusions.

Errors of the observations may stem from measurement-problems, misinterpretations, unlikely random events etc.

A common error is to think that correlation implies a causal relationship. This is not necessarily true. 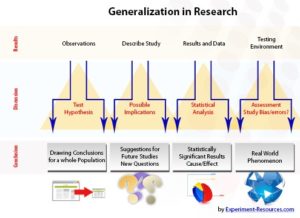 Validity refers to what degree the research reflects the given research problem, while Reliability refers to how consistent a set of measurements are.

A definition of reliability may be “Yielding the same or compatible results in different clinical experiments or statistical trials” (the free dictionary). Research methodology lacking reliability cannot be trusted. Replication studies are a way to test reliability.

Both validity and reliability are important aspects of the research methodology to get better explanations of the world.

Logically, there are two types of errors when drawing conclusions in research:

Type 1 error is when we accept the research hypothesis when the null hypothesis is in fact correct.

Type 2 error is when we reject the research hypothesis even if the null hypothesis is wrong.